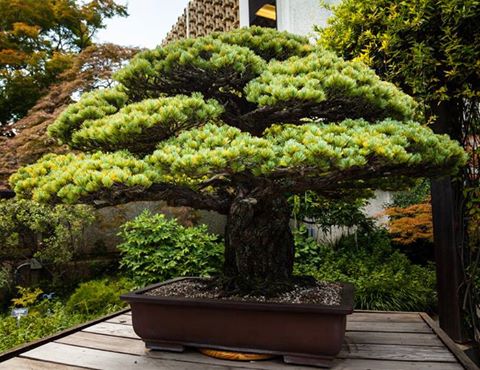 The Yamaki Pine, a miraculous specimen that survived the Hiroshima bombing was only two miles from the detonation of “Little Boy“, the bomb dropped on Hiroshima in World War II. It was completely unharmed by the blast.

It was planted in 1625 and donated by bonsai master Masaru Yamaki in 1976 as part of a 53-specimen gift to the United States for its bicentennial. It is now part of the National Bonsai & Penjing Museum in Washington D.C., USA.

Jack Sustic, the museum curator mentions that caring for it includes seeing that it is watered daily, inspected for insects, rotated for the sun twice a week and repotted on occasion.

Little was known about the tree until March 8, 2001, when two brothers visiting from Japan showed up at the museum to check on their grandfather’s tree. Shigeru, 21 and Akira, 20, are the grandsons of the late bonsai master Masaru Yamaki and explained to the museum staff that their family had operated a commercial bonsai nursery in Hiroshima for several generations which is now a private bonsai collection.