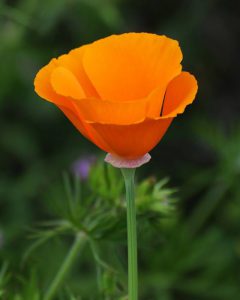 California poppy is native to USA and Mexico.

It flowers from June to September and is the official state flower of California in USA.

It has been used as a sedative herb and also as a diuretic. The sap is mildly narcotic that is used to relieve toothache. It is similar in its effect to the opium poppy but much milder as it does not depress the central nervous system.

It is a popular garden plant and common names include golden poppy, California sunlight and cup of gold.”