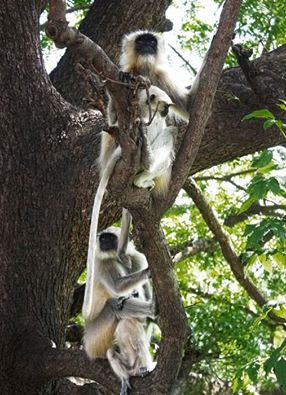 They spend half their time on the ground and the other half in the trees. They rest in trees and prefer the highest branches. They are large creatures and their tails are longer than their bodies.

Also known as Hanuman langurs, they are named after the Hindu deity Hanuman and widely found in the Indian Subcontinent. Most species are found at low to moderate altitudes except the Nepal and Kashmir gray langur that occur at 4,000 meters and above in the Himalayas. The Kashmir gray langur is an endangered species and found in pine, moist temperate and alpine cedar forests. ”