The Asian elephant–Elephas maximus population is estimated to be 27,312 by the All-India Elephant Population Estimation of 2017, a first of its kind in the country. The elephant has been labelled a mega-herbivore by the World Wildlife Fund-they are plant-eating mammals that weigh more than 2,200 lb (1,000 kg) and require up to  330 lb (150 kg) of plant material each day. As WWF interestingly points out, an elephant spends about 16 hours of its day feeding. The Indian Elephants “feed mainly on grasses, but large amounts of tree bark, roots, leaves and small stems are also eaten” (source: WorldWide Fund). With its habitats shrunken by mining, roads, canals, and settlements, the search for food and water bring elephants to agricultural fields and villages, giving rise to fatal man-animal conflict.

SanctuaryAsia in April 2011 (Human-elephant Conflict in India) that the plantations raised in Jaldapara Wildlife Sanctuary succeeded in encouraging the animals to stay within the park, reducing the potential for human-elephant conflict. The ‘Right of Passage’ study published by the Wildlife Trust of India in collaboration with Project Elephant and the U.K.-based NGO Elephant Family in August, 2017  points out how constricted corridors have become since 2005 – about 74% corridors are of a width of one kilometre or less today, compared with 45.5% in 2005, and only 22% corridors are of a width of one to three kilometres now, compared with 41% in 2005. The planting of trees will help augment the size of the corridors increasing the sheltered and screened area for the elephants.

In their research paper “Feeding Preferences of the Asian Elephant (Elephas maximus) in Nepal” Raj Kumar Koiral et al found that elephants preferred browsed species of plants during the dry season, while browsed species and grasses were both important food sources during the rainy season. Elephants targeted leaves and twigs more than other parts of plants. (Browsing is a type of herbivory in which a herbivore, such as an elephant, feeds on leaves, soft shoots, or fruits of high-growing, generally woody, plants. This is contrasted with grazing, usually associated with animals feeding on grass or other low vegetation.)

In one study published by Kalpana K. Mohapatra, A.K. Patra and D.S. Paramanik on Food and feeding behaviour of Asiatic Elephant (Elephas maximus Linn.) in Kuldiha Wild Life Sanctuary, Odisha, India consumption of tree species by the Indian elephant was at 56% as compared to shrubs (20%), herbs (14%) and climbers (10%). Tree species such as Mahua (Madhuca indica) and Mango (Mangifera indica), Bael (Aegle marmelos), Ber (Ziziphus mauritiana) were found to be a superior part of their diet. The Asian elephant distinguishes itself from its African counterpart because of its dependency on arboreal forests as opposed to grasslands. Due to the variation in climatic conditions prevalent across the two continents, the elephant population in Asia and more specifically India, depend on its tropical trees—consuming twigs, branches, stems, root, flowers, fruit etc. 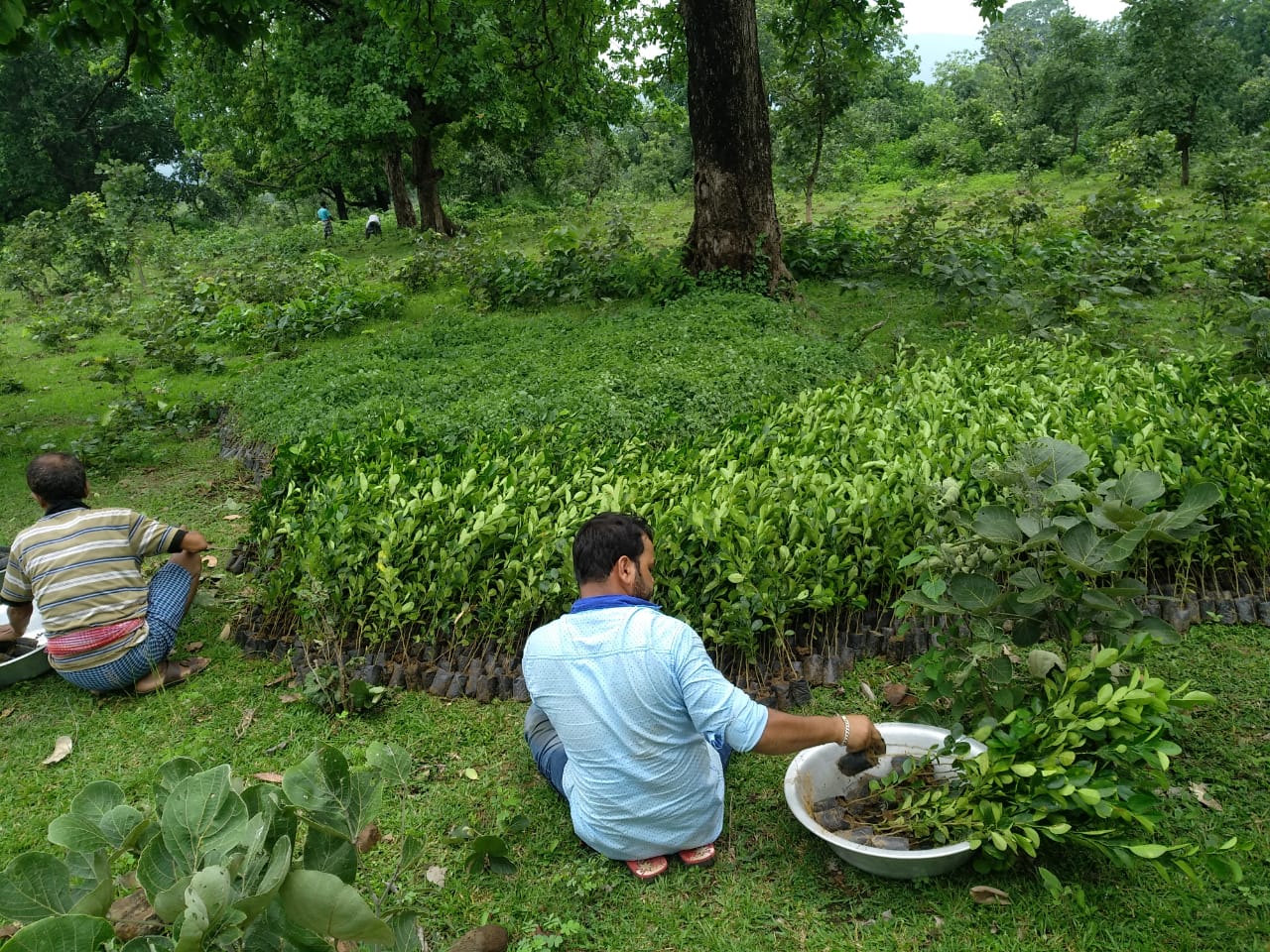 Maintenance of nursery prior to the plantation.

The Trees for Elephants project created by Grow-Trees.com aims to provide a sustainable and secure food source for elephants around the buffer zone of the Dalma Wildlife Sanctuary. The project is implemented on community-held land in and around Laylam village in the East Singhbum district of Jharkhand.

In a report called Right of Passage: Elephant Corridors of India published by the Wildlife Trust of India the tri-state region of Jharkhand, Odisha and West Bengal is home to a population of 2, 500 elephants. Due to heavy mining activities, shift cultivation and other developmental activities it has become the most fragmented elephant habitat in the country. 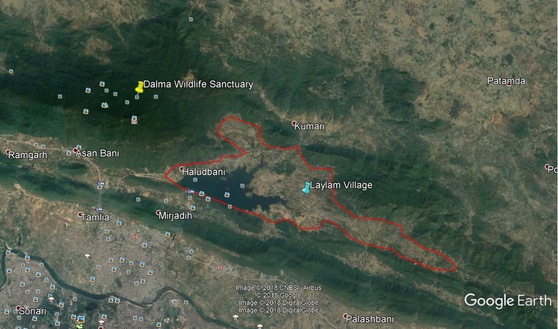 A bird’s view of the project site.

According to Elephant Country, Elephant herds move from the Dalma Wildlife Sanctuary of Jharkhand to Midnapore East and West Forest Divisions, Bankura North and South Divisions, and other places in West Bengal. This project site in East Singhbum district connects protected forest areas between Odisha and West Bengal. The plantation of 1, 00, 000 native trees in East Singhbum will help provide secure passage to elephants looking for fodder and expanding their home range to mate. 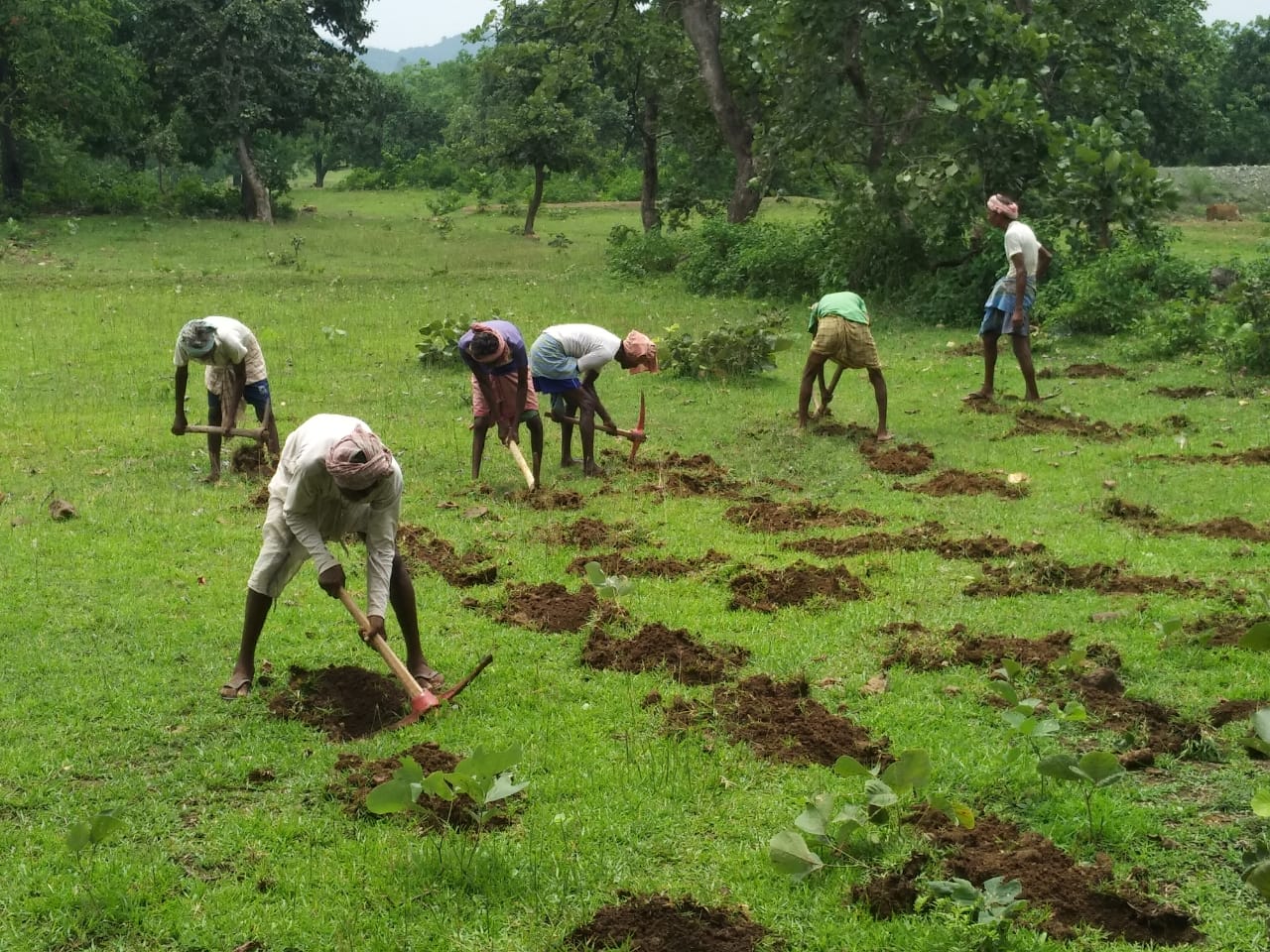 Pit digging by members of the Laylum village.

Any effort toward wildlife conservation has a net positive impact on the human communities residing in proximity to such projects. In the short term, plantation activities will provide 9,000 workdays of jobs for rural communities. In the long term, the mature trees will help reduce human-elephant conflict, keeping elephants from entering and feeding on cropland, and approaching residential areas around forests in search of food. Indirect employment from fruit, flowers, fuel and fodder is also expected once the trees mature. The trees will also help improve water catchment, reduce soil erosion and absorb carbon dioxide from the atmosphere.
66
SHARES
ShareTweet