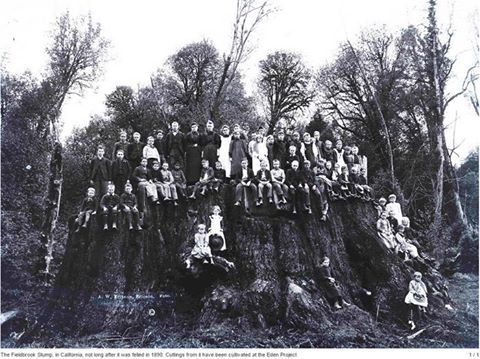 The Fieldbrook Redwood would have been the biggest tree alive today had it not been felled in 1890 reputedly to satisfy a drunken bet about making a table big enough to seat 40 guests from a single slice of tree-trunk.

After a century of being left for dead, a giant redwood that grew as tall as a 30-storey building over the course of nearly 4,000 years in northern California is about to be reborn as a clone planted on the coast of Cornwall, UK.

Scientists have managed to cultivate cuttings from the Fieldbrook Redwood Stump, which is 35 feet in diameter, and 10 of its clones are now growing as knee-high saplings in the plant nursery at the Eden Project, as part of an ambitious plan to propagate and replant some of the oldest trees in America and Britain.

Sir Tim Smit, executive vice-chairman of the Eden Project has included the planting of another 99 clones from 10 ancient American redwoods.

“The notion of putting back trees that have their own story has huge appeal. There are lots of ancient trees in Britain that have a piece of history attached to them.” said Sir Tim.