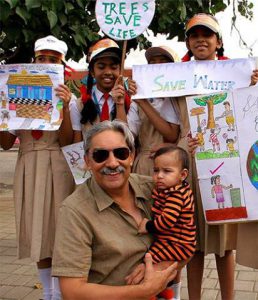 Mr. Bittu Sahgal is an Environmental Activist, Writer and the Founding Editor of Sanctuary Asia, India’s premier wildlife and ecology magazine. He has been spreading the word about conservation in India since 1981. It is through his awareness creating activities that many Indians have opened their eyes to India’s desperate need for conservation. He is also a member of the National Board for Wildlife, India and the founder of “Kids for Tigers” whose programme reaches to over a million Indian children. He focusses on biodiversity protection, climate change and promotion of non-carbon energy options. According to him, delay is the deadliest form of denial and hopes that the next generation will do better to save our planet.