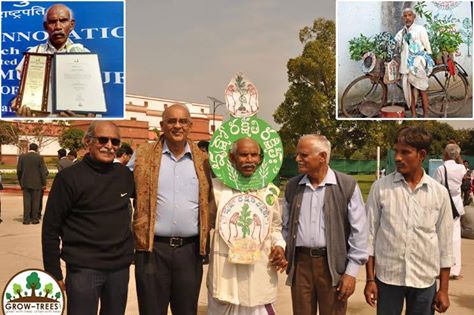 He is on a mission to bring back India’s green cover and on March 2015, his efforts were acknowledged and he was felicitated by President Pranab Mukherjee at National Innovations and Outstanding Traditional Knowledge Awards.

He is a native of Khammam, Telangana in India and is better known locally as ‘Chetla Ramaiah’, Chettu means tree. He has been collecting seeds of several native trees such as Bael, Peepal, Kadamba, Nidra Ganneru, Kanuga, Neem, Erra Chandanam, etc. to cover every barren land with green patches. He started by greening a 4 km stretch on both sides of a path in Khammam.

He says, “I do not believe in people who cut trees but prostrate before a stone. For me, Nature is God and God is Nature.” and “Instead of giving a fruit to a child, give them a plant. Let them nurture the plant into a tree and enjoy its fruits forever. This way, they learn to love nature. Today’s children are tomorrow’s citizens. Similarly, today’s plants are tomorrow’s trees.”

In Khammam, he is known as a person who carries plants on his cycle and seeds in his pocket and pedals miles together, planting trees and strewing seeds with a fond hope that the entire area will be green in the coming years.