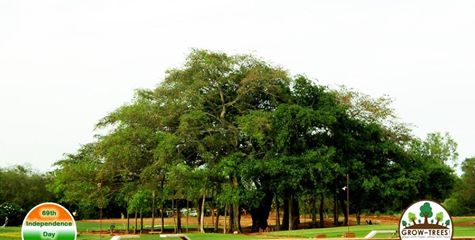 “Indian Banyan is native to and the national tree of the Republic of India.

It is among the largest trees in the world by canopy coverage. A specimen in Andhra Pradesh, India covers 205,670 square feet and is the largest single tree by two-dimensional canopy coverage area. It is also the world’s largest known tree by perimeter length with a perimeter of 2,776 feet.

An interesting feature of this tree is that it drops roots down from its branches that become additional trunks that serve to support the weight of the branches. This in turn allows the tree to spread out over a rather large area. There are several different species from the Ficus genus that are commonly called Banyan although the true Banyan tree is the Ficus Benghalensis.

It is considered sacred in India and often found around temples. The large size of the tree’s canopy is useful in providing shade. Nearchus, an admiral of Alexander the Great described a large specimen on the banks of the Narmada, Gujarat. The tree’s canopy was so extensive and it sheltered around 7,000 men. ”