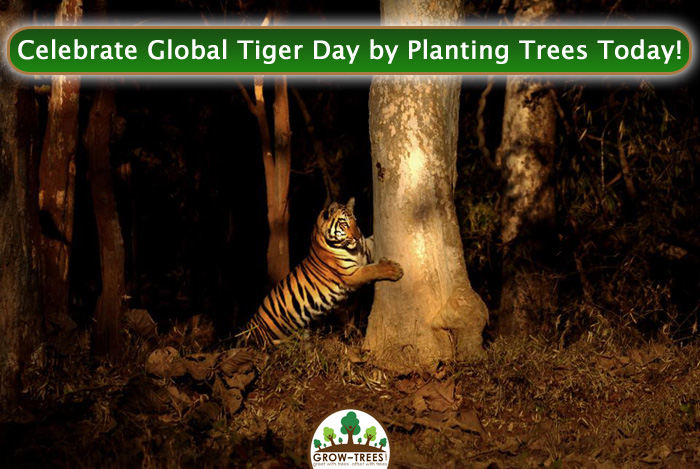 “Tigers, except when wounded or when man-eaters, are on the whole very good-tempered…Occasionally a tiger will object to too close an approach to its cubs or to a kill that it is guarding. The objection invariably takes the form of growling, and if this does not prove effective it is followed by short rushes accompanied by terrifying roars. If these warnings are disregarded, the blame for any injury inflicted rests entirely with the intruder”- Jim Corbett

Unfortunately, the necessity of saving Tiger population has been recognised very late. This nonchalance has climaxed into dwindling Tiger population across the world along with the extinction of many great species, such as- Javan, Caspian and Balinese Tigers.

Tigers make the apex predator just after humans and make a significant contributor to the health of our ecosystem. If we make sure Tigers live, it will mean we have to put an effort to protect its prey such as antelopes and deer which will in turn need the protection of their food in terms of vegetation and forests. In this way, the entire forest gets saved. This will conclude in reduction of soil erosion, protection of river basins, ground water and eventually humans. It can be implied that helping the home of Tigers will help the home of others and healthy Tiger population will result in healthier ecosystems.

Established in 1994, the Global Tiger Forum is the only inter-governmental body for the conservation of Tigers. Its membership included seven Tiger range countries namely, India, Bangladesh, Bhutan, Myanmar, Cambodia, Nepal and Vietnam. Some international NGOs are part of the forum such as WWF, International Fund for Animal Welfare, and TRAFFIC.

Earlier in 1973, the Government of India launched “Project Tiger”, administered by National Tiger Conservation Authority, aiming to conserve the population of Bengal Tigers in their natural habitats. Currently, the country has 49 Tiger reserves governed under Project Tiger. The government has also set up a Tiger Protection Force to combat poachers and funded the relocation of humans living in the Tiger inhabited areas to minimize the man-animal conflict. 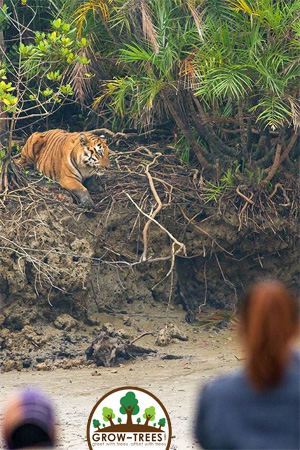 Grow-Trees.com, as an organisation is dedicatedly working for wildlife and communities,  taking steps to alleviate their conditions. Planting Trees for Tigers is one of the ways we have contributed towards this cause. In our last post, we have provided information about our completed Tiger projects namely, Kanha National Park and Kanha-Pench corridor. In this final post, we are providing you the information on our on-going projects viz, Sariska Tiger Reserve (Alwar, Rajasthan) and Sundarbans National Park (West Bengal).

A total of 200,000 trees have been planted by Grow-Trees.com in the project at the periphery of Sariska Tiger Reserve. The project area is a cluster of 300 villages located in and around the Tiger reserve. This Tiger Reserve lost all of its 26 Tigers in the year 2006, mainly due to poaching. Recently, Tigers from other Tiger Reserves have been relocated in the area,  but the non-breeding or inadequate breeding and several miscarriages has been a major cause of concern for the authority.  Studies have been conducted by some eminent biologists, recording stress response of Tigers, indicating  reasons such as livestock movement, woodcutting, human and vehicular movement, etc. Currently, there are 13 Tigers in the sanctuary, including four cubs, two male and seven female Tigers.

Grow-Trees.com, in association with renowned NGO KRAPAVIS, has been planting trees at the periphery of Sariska Tiger Reserve. Thereby, reducing  dependency of communities to venture into the wild for their forest related resources. Eventually, communities and wildlife won’t be at conflict with each other. Many local species of plants have been re-introduced, like fruit trees and a variety of medicinal plants and the communities are encouraged to upkeep of the same. With excess funds, artificial water tanks have been built and maintained that are beneficial for nursery raising and also for local use. 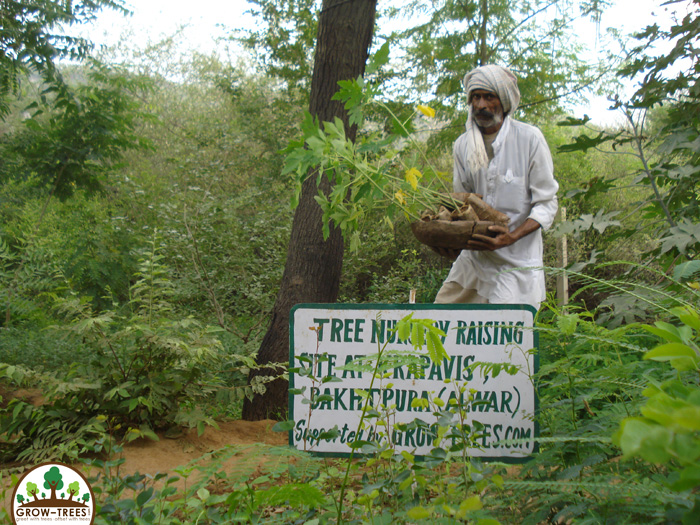 The other project of Grow-Trees.com at Sundarbans National Park is also a live project where close to 136,000 trees have already been planted. Sundarbans, a UNESCO World Heritage Site, is the largest deltaic mangrove forest in the world with an area of 10,200 sq. km area of which 5937 sq. km and 4263 sq. km of reserve forests are spread respectively over the borders of Bangladesh and India. Located at the mouth of the Ganges and Brahmaputra rivers between India and Bangladesh, its forest and waterways support a wide range of fauna including a number of species threatened with extinction. The mangrove habitat supports the single largest population of Tigers in the world; the Tigers have adapted to an almost amphibious life, being capable of swimming for long distances and feeding on fish, crab and water monitor lizards. 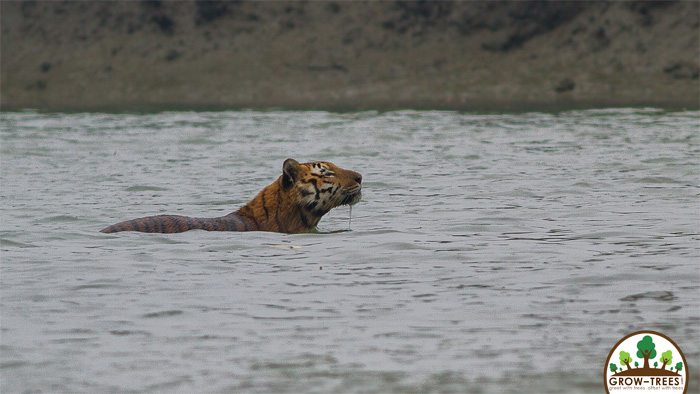 The plummeting numbers of Tigers in the area has raised many eyebrows as this area is considered to be a home for the largest population of Tigers. This region is also known for man-eaters. There are a range of theories suggesting reasons such as high salinity of water with tides washing away urine and scat marks and lack of territorial marking. This instils a constant discomfort among Tigers leading them to become extremely aggressive. Frequent cyclones bring dead bodies of humans through the water route unintentionally giving Tigers an opportunity to scavenge, resulting in   developing a taste for human flesh thus bringing out the cause for such attributions in their behaviour. Lastly, there is a lot of human intervention in the forest as the communities are dependent on the resources such as fish, crab, honey, wood, etc. which makes them an easy prey for Tigers. Controlling these man-eating Tigers is a major activity for the management of the Park.

Sundarbans, home to many poor communities who are largely migrant and landless. Apart from external threats such as cyclones, floods and sea level rise, premature and ill-planned establishment of settlements, rapid population growth with absence of industries and local employment opportunities along with habitat destruction are creating more demand for the preservation of natural resources.

Grow-Trees.com is planting different types of Mangroves in the area to help the communities and reduce the recurrent man-animal conflict. The trees planted will create jobs in the nursery and planting activities, directly support rural livelihoods, improve fisheries catch, provide flowers, fruit, fodder and fuel to rural communities and living creatures, generate oxygen, reduce carbon dioxide in the atmosphere, fight climate change, and benefit wildlife including the endangered Tiger. 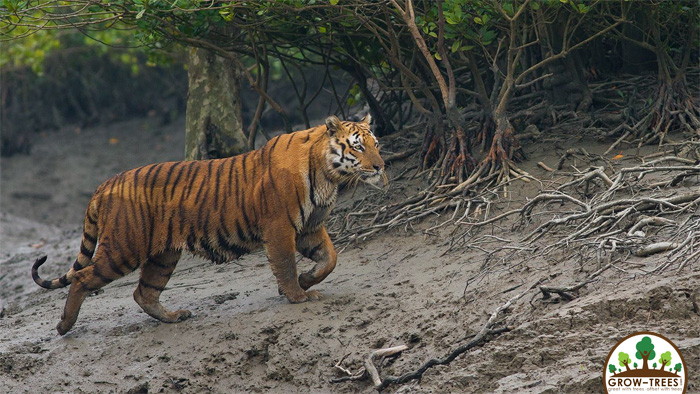 Today, on Global Tiger Day, we urge you to plant trees for this charismatic animal and  also for the benefits of the communities in these areas. Citing Tigers in a Tiger Reserve is difficult nowadays but planting trees for them- IS NOT!

One thought on “Trees For Tigers – Global Tiger Day”